This week –  a middle grade favorite.

And next week, I’ll be launching a monthly series from published authors entitled “Mining for Heart.” Stay tuned. 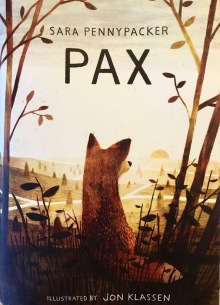 Opening:
The fox felt the car slow before the boy did, as he felt everything first. Through the pads of his paws, along his spine, in the sensitive whiskers at his wrists. By the vibrations, he learned also that the road had grown coarser. He stretched up from his boy’s lap and sniffed at threads of scent leaking in through the window, which told him they were now traveling into woodlands. The sharp odors of pine – wood, bark, cones, and needles – slivered through the air like blades, but beneath that, the fox recognized softer clover and wild garlic and ferns, and also a hundred things he had never encountered before but that smelled green and urgent.
The boy sensed something now, too. He pulled his pet back to him and gripped his baseball glove more tightly.
The boy’s anxiety surprised the fox. The few times they had traveled in the car before, the boy had been calm or even excited. The fox nudged his muzzle into the glove’s webbing, although he hated the leather smell. His boy always laughed when he did this. He would close the glove around his pet’s head, play-wrestling, and in this way the fox would distract him.
But today the boy lifted his pet and buried his face in the fox’s white ruff, pressing hard.
It was then that the fox realized his boy was crying.

Brief synopsis (from barnesandnoble.com)
Pax and Peter have been inseparable ever since Peter rescued him as a kit. But one day, the unimaginable happens: Peter’s dad enlists in the military and makes him return the fox to the wild. At his grandfather’s house, three hundred miles away from home, Peter knows he isn’t where he should be—with Pax. He strikes out on his own despite the encroaching war, spurred by love, loyalty, and grief, to be reunited with his fox.
Meanwhile Pax, steadfastly waiting for his boy, embarks on adventures and discoveries of his own. . . .

Why I like this book:
Pax is a tender story of a boy and his pet. And SO much more. Chapters alternate between the boy and the fox, slowly revealing a web of relationships. The two parallel story lines, linked by the bond between the two characters, become a powerful narrative on family, loss, nature, hope, and relationships. It’s sure to spark meaningful conversation on a number of topics. I’m a great fan of Pennypacker’s Clementine series, and though this story is very different, it too has a thread of “finding one’s place” and strong characters that nestle into your heart and make you want to take them home.

2 thoughts on “Pax by Sara Pennypacker”