What an honor to have a “Behind the Scenes” guest post from Jo Ann Allen Boyce, and Debbie Levy on how they teamed up to create THIS PROMISE OF CHANGE: ONE GIRL’S STORY IN THE FIGHT FOR SCHOOL EQUALITY (Bloomsbury Children’s Books, 2019)!

Jo Ann Allen Boyce, a retired pediatric nurse and sometime jazz singer, lives in Los Angeles. As a teenager in 1956, Jo Ann was a key participant in an important event in the struggle for equal rights for African Americans. She and eleven other students in Clinton, Tennessee—they became known as the Clinton 12—were the first African Americans to desegregate a public high school in the South. (This was a year before the Little Rock 9.)

Debbie Levy, author of books for children and young adults, lives in Maryland. In 1956, she hadn’t yet been born. And once she was born—well, like most everyone else, she’d never heard of the Clinton 12.

JO ANN: “You should write a book, Ms. Boyce.” It’s a remark I’ve heard frequently over the past twenty-five years when presenting the Clinton 12 story to young scholars in schools and churches. It’s always been a dream of mine, yet no matter how many attempts I made, that task of writing a book seemed far too daunting for me. Then my daughter-in-law, Libby Boyce, posted something about me and the Clinton 12 on Facebook. 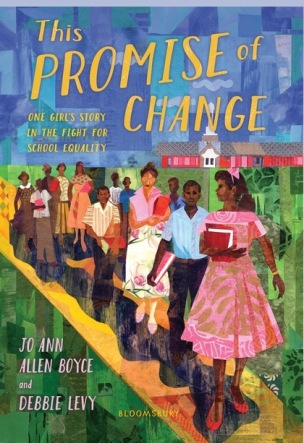 DEBBIE: It was February 2015. Libby wrote: “In honor of Black History Month, I want to share my mother-in law and 11 other children’s experience as young students in Clinton TN, who desegregated the first High School in the South. This story has somehow not risen to the level of other similar stories, but it should! Respect to all of those who paved the road for our children!”

JO ANN: A friend of Libby’s—they’d known each other since childhood—saw the post. This friend said something like, “this would make a great children’s book” . . .

DEBBIE: . . . and the friend was Caryn Wiseman, my literary agent. Caryn got in touch with me and also with some other clients who write nonfiction.

JO ANN: Libby told Caryn that I’d always wanted to write a children’s book about my experience, and I was open to working with one of her clients. I took a look at some of Debbie’s books and thought, “This is who I’d like to work with.”

DEBBIE: Because the Clinton desegregation crisis received so much press attention in 1956, I could really get to know the teenage Jo Ann. She was quoted in national and regional newspapers. She was interviewed on camera for an episode of Edward R. Murrow’s famous “See It Now” program on CBS. There she is—you can watch her, too—speaking with both frustration and equanimity in December 1956 about the struggle.

I wanted to work with this person! And I wanted to be part of sharing this consequential story, so widely known in its day—and yet mostly lost to us today.
It took a while to figure out the best format for this book. But I kept coming back to Jo Ann’s voice, and her love of poetry. And it wasn’t only that poetry fit Jo Ann; it also fit the story. Poetry excels at conveying emotion and this is an emotional story.

JO ANN: When Debbie proposed telling the story through chapters written in verse, I was thrilled. I loved her book, The Year of Goodbyes, also nonfiction written in poetry, about her mother’s childhood in Nazi Germany facing hatred and violence just because she was Jewish—experiences that resonated with what we faced just because of the color of our skin.

We worked together for many months, back and forth by phone, by email, by text, by snail mail. We finally met in person when we traveled to Clinton, Tennessee in 2017 to look around the town together, go to the Green McAdoo museum [which commemorates the Clinton 12], and conduct interviews with surviving Clinton 12 members.

DEBBIE: It was all eye-opening and incredibly moving. And at the end of this journey, we have not only a book, but a deep and lasting friendship.

The book is This Promise of Change: One Girl’s Story in the Fight for School Equality (Bloomsbury 2019).

3 thoughts on “Behind the Scenes: Jo Ann Allen Boyce, Debbie Levy, and This Promise of Change”