Last week I shared Monica Clark-Robinson’s debut picture book, LET THE CHILDREN MARCH. Today she shares how she found the heart of this story – in the footsteps, the rhythm, the beat of a poem that pushes forward, powered by the feelings of the participants. 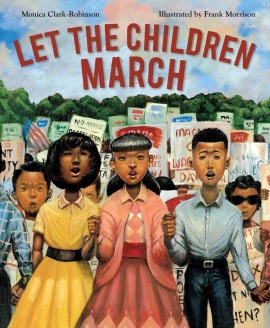 Writers who are drawn to nonfiction for children are usually pulled toward the genre because they want attention to be paid to a story.  We want to highlight a person, or an event–an animal with which we are fascinated, or a scientific phenomena we can’t shut up about.  We write the books to give attention to these things.  We want everyone to know, to be as excited as we are.

So, at the core of what we do, we are, quite simply, trying to get children to pay attention.  It’s as simple and as difficult as that.  We are noticers, and we want the children to notice, too.  What separates us from the history or science textbooks is heart–both our own tender writer hearts and the heart of the story.  We put that into the words, tugging at the heart of the children and the adults who read with the children.  We might tug with joy or sadness, with indignation or fear, with amazement or excitement, or dozens of other feelings that these stories make us feel.

Emily Dickinson said “If I read a book and it makes my whole body so cold no fire can warm me I know that is poetry. If I feel physically as if the top of my head were taken off, I know that is poetry.”  I have similar feelings about a good nonfiction picture book.  I remember the first time I felt this way.  I was working at a bookstore, and I came across “Moses:  When Harriet Tubman Led Her People to Freedom” by Carole Boston Weatherford and Kadir Nelson.  I openly cried in the middle of the children’s section the first time I read it.  I had heard Harriet Tubman’s story before, of course, but the book moved me in a way no other telling had.  Why?  Weatherford imagines a conversation between Harriet and God, a voice within that spurs her to push through, even when it gets hard.  When the book opens in the first couple of pages with a voice whispering to Harriet: “I set the North Star in the heavens, and I mean for you to be free,” I’m a total goner. 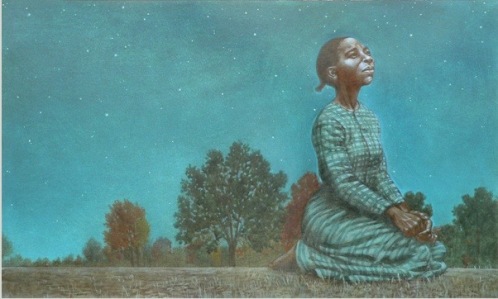 I cry over this book every single time, and I’m not even much of a religious person!

What Weatherford did right (and honestly does right in almost everything she writes) was to find a unique lens for the story–a way to get under its skin, so to speak.  When I wrote “Let the Children March,” I began with the idea of the cadence of a villanelle poem, with its repeating refrain at the end of each stanza.  My opening stanza was:

“Let the children march,” the Reverend said.  “They will lead the way out.”

The path may be long and troubled, but I’m gonna walk on!

Singing the songs of freedom, one-thousand strong we came.

Many, many revisions later, my agent suggested letting go of the form of the poem, but we kept the marching forward of the repeated lines.  I believe part of why the book succeeds (can I say that?) is due to the early poem and the heart it infused into the book.  I also emailed with and spoke to people who had lived this history.  I wanted to know–not so much what happened, but how they felt about what happened.  That’s the heart of the book.

I am drawn to stories that have been forgotten, or stories that were never given their due attention to begin with.  I am drawn to margins and hidden tales.  I want readers to pay attention, to remember.  But stale facts and dates don’t usually get remembered, unless there’s a test the next day!  If we want our readers to have a “Carole Boston Weatherford” moment in the middle of the bookstore, we have to make certain that there is also heart on the pages, right alongside the facts.  It’s that heart we must pursue, always.

Thank you, Monica. That’s what it’s all about –  the elusive CBW moment!

18 thoughts on “Mining for Heart: “Paying Attention” by Monica Clark-Robinson”