Today in my Mining for Heart series, Natasha Wing shares her process with a particularly challenging topic – Grand Central Station. Thank you, Natasha!

“Make the Inanimate Object a Character”

Before I wrote for children, my writing training was in journalism and advertising. I worked for a newspaper in Arizona in their corporate services department. Although I wasn’t a journalist, I wrote many newsletters and press releases for the newspaper. I also wrote the copy for their in-house ads promoting the newspaper’s columnists and features. After that I worked at a small advertising agency. So when I started writing non-fiction for children, I had some horrible habits to break.

Often I’d be told that my writing sounded too reporterly. “You’re stacking facts but missing the emotional core of the story.” Finding the heart of the story has always been a challenge to me.

It was especially challenging when I wrote about Jackie Kennedy Onassis and her involvement in saving Grand Central Terminal. The story is essentially about a woman and a building (with historic preservation as the theme. Not a typical topic for readers 6-10.)

The first challenge was translating the concept of historic preservation for children. To make it more relatable I used sentences like “Americans cared about their history.” “New Yorkers didn’t want to lose this link to their city’s past.” Grand Central was saved.” “How could the neglected Grand Central be brought back to its former splendor?” You can see how words like cared, saved, neglected have emotional responses.

Now for the characters of the story. There was plenty of information about Jackie and why she got involved with the Save Grand Central campaign. I had newspaper quotes, a letter she’d written to the mayor, interviews, and information from the historical society. So finding Jackie’s motivation and emotional tug was easy enough. 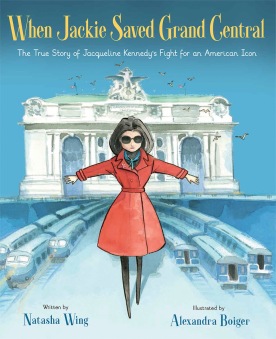 I revised this story over and over again trying to get the historical facts straight. But something wasn’t quite coming together. Reactions to the story were still lukewarm.

Then one day I asked a writer friend, multiple recipient of the Robert F. Sibert Informational Book Medal Barbara Kerley, what she thought was wrong with the story. Her advice was “think of Grand Central as if it was a character.” Why would people care if it was saved or torn down? What did they love about the building? Why was it important to them? Did it symbolize anything? How did they interact with the building that made it special to them?

The light bulb went off!

In the next go-around of revisions I looked for ways to show how important Grand Central was with examples of how people used the building, from celebrities to everyday New Yorkers. I included information about how many passengers traveled in and out of the terminal every year, and that it was not just a building but also the gateway to the city that never sleeps. I built up the reasons why destroying such a lovely landmark would be a great loss to the city. Because New Yorkers and Jackie cared, the readers now cared about Grand Central. When readers care, you have put heart in the story. 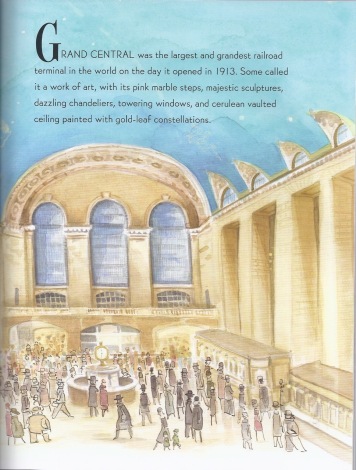 Now that readers were pulling for Grand Central Terminal to “survive” demolition, the court cases that were part of the plot carried more emotional weight and became the tension points of my story. Tension. Good. The outcome of the final court case in the Supreme Court served as my story climax.

What followed the court ruling in favor of saving Grand Central was the renovation, the bringing back the former beauty to its glory once again. Unfortunately, Jackie O didn’t live to see the final makeover and rededication. Because she was so connected to the building/character, her death had greater emotional impact in the story, and the symbolism of one former beauty making its return and another passing away is heart wrenching.

If you are writing about an inanimate object, think about ways you can make human connections with the object. This is especially true for stories about inventors. For instance, why was the computer necessary to people of those times? How did it change their lives? How would it save lives? What would lives be like if the object was gone?
Include examples of people interacting with the object to make the reader connect emotionally with your “character” and you’ll add heart to your nonfiction story.

Natasha Wing has been writing children’s books for 25 years. Her newest narrative nonfiction, When Jackie Saved Grand Central: The True Story of Jacqueline Kennedy’s Fight to Save an American Icon, received two starred reviews from Booklist and Kirkus. She is also the best-selling author of the Night Before series.

7 thoughts on “Mining for Heart: “Make the Inanimate Object a Character” by Natasha Wing”