Today I’m honored to host Suzanne Slade, author of more than 100 (yes, WOW!) books. For a rookie like me to share a literary agency and an editor with her is mighty inspiring! Many thanks to Suzanne for telling us about her process of mining for the heart in a few of her books. 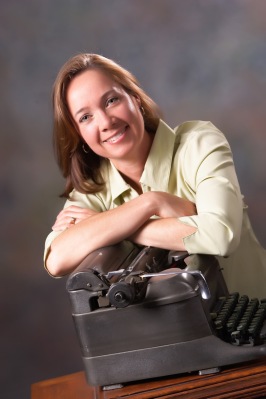 As a nonfiction author, new picture book ideas find me often. Some have come from my children, others from students and teachers I meet during author visits. I’ve also inadvertently found book ideas in the newspaper, while listening to the car radio, watching TV, and strolling through an outdoor festival on vacation.

As soon as a new book idea finds me, I write it down immediately. (The few times I’ve forgotten ideas, I’m convinced they would have been the best books ever!) Anyway, a long list of potential picture book topics is always floating around my desk— usually buried beneath the pile of research books for the manuscript I’m currently working on. Problem is, I don’t have enough time to write them all.

So how do I decide which ideas I’ll spend years researching, writing, and revising? Behold—the simple goosebump test. I only select a topic which has a surprising, fascinating, or little-known fact that gives me goosebumps (literally.) If a story idea is that intriguing to me, it seems editors and young readers are usually interested in the topic too.

Of course, a goosebump moment is just the beginning of the long, unpredictable (and often frustrating) path to publication. But that inspiring moment is an exciting way to start the journey!

Every author has his or her own method of deciding which book ideas they will pursue. In case you’re interested, here are a few of my “Goosebump Moments” which eventually turned into books: 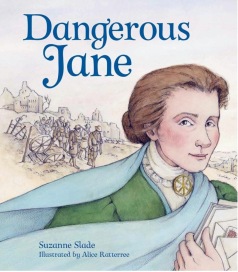 Dangerous Jane (releasing Sept. 2017)
One day I heard a friend mention that Jane Addams was the first American woman to win the Nobel Peace Prize. As a Chicagoan, I was very surprised I hadn’t heard this before. Then I discovered years before Jane was awarded the Nobel Laureate title, the FBI had named her “the Most Dangerous Woman in America” for her work to help end WWI and tireless efforts to care for families overseas devastated by the war. The irony of “the Most Dangerous Woman in America” becoming our first female Nobel Laureate was a huge goosebump moment for me!

The Music in George’s Head: George Gershwin Creates Rhapsody in Blue
Many years ago on the Fourth of July, I was watching a fireworks show on our local PBS channel while George Gershwin’s famous Rhapsody in Blue played in the background. During the program the commentator shared many interesting facts about this well-loved, iconic tune. When he mentioned the first time Gershwin performed this song he didn’t have any sheet music and simply played the notes in his head— it was goosebumps from head to toe and a new story was born!

Out of School and Into Nature: The Anna Comstock Story
While doing an author visit at Prairie Crossing School in IL, I spied a building named after Anna Comstock. Curious, I did some research and discovered Anna was an important role model who boldly changed the “rules” of her day by proving that women could be researchers, scientists, and college professors. After studying at Cornell University (during a time when women were discouraged from studying science), Anna went on to become an accomplished artist, groundbreaking educator, author, and the first woman to be named a professor at Cornell University. Cue the goosebumps! 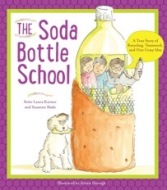 The Soda Bottle School: A True Story of Recycling, Teamwork, and One Crazy Idea
During a vacation in Washington D.C., I spotted a colorful, plastic wall made of old soda bottles and trash at an outdoor festival. When I discovered students in Guatemala had expanded their overcrowded school by building new rooms out of old bottles and trash, goosebumps told me I needed to share this story with young readers.

Friends for Freedom: The Story of Susan B. Anthony and Frederick Douglass
While researching Susan B. Anthony and Frederick Douglass to write a separate biography about each for an educational publisher, I discovered these two amazing freedom fighters had remained friends for over 45 years through good times and bad (and there was a lot of bad!) In fact, Susan had been with Frederick the day he died. I’d never heard anything about this surprising friendship, but goosebumps spurred me to dig further into research and write about these two remarkable friends.

9 thoughts on “Mining for Heart: That “Goosebump Moment” by Suzanne Slade”