Do concept books have a special element of heart? The good ones do! This month, Miranda Paul shares her process in creating her latest book, 10 Little Ninjas. There’s much more to this concept book than you might think.

AND…we have a giveaway! Leave a comment below during the month of September and you’ll be entered to win a copy of 10 Little Ninjas. One lucky winner will be announced in October’s “Mining for Heart.”

From Classic to Contemporary: Writing (or Rewriting) 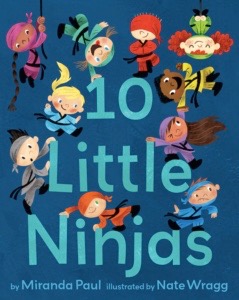 Remakes. Easy, right? Anyone can rewrite a classic song, poem, or nursery rhyme. All you have to do is change the words. And—if someone illustrates it—voila! You’ve got a concept picture book.

Just because a piece of writing is “clever” does not mean it is publishable, especially as a book for children. When I began writing, it was easy for me to confuse “clever” with “marketable” or even “great.” Some of my favorite books are very clever, but they also have a deeper substance which has made them successful.

Writing parodies or remakes, which are part of the “concept picture book” category, is extremely tricky. (Loosely defined by me, “concept picture books” are more idea-based than character- or plot-driven.) Often, my ideas for new books begin with a single topic, a setting, a scientific fact, or a theme rather than a character and a plot. Not everyone works this way. I guess it’s my gift (or my curse, since ideas are a dime a dozen).

When rewriting a classic or creating a concept book without distinct characters, plot, conflict, etc., one has to be wary of being b-o-r-i-n-g or slight. I ask myself, what will make my book (about XYZ concept) more interesting than an encyclopedia entry, a web article, video, song, joke, or photo about the same thing/place/concept? What will make it work as a picture book, a specific format meant to engage and entertain today’s very young audiences?

• Is it a fresh and original take on the classic work (or subject matter)?
• Is it relevant to today’s readers, but could still stand the test of time?
• Does your remake have enough to appeal to readers who don’t know the original (or who don’t have much context information)?
• Will cash-strapped parents/teachers be willing to pay $15-20 to read it (again and again)?

Humor me, and let’s take my newest book, 10 Little Ninjas, as an example. It’s written in the style of the classic “Five Little Monkeys” (or “Ten Little Monkeys”). Not really much substance to the original. It’s actually a pretty boring (and didactic) old song: Kids jump on a bed, Mom calls a doctor each time one hits their head, and the doctor scolds them until there are none left. That’s it.

To make it work as a picture book, which is typically 12-15 spreads, I included 10 countdown stanzas plus a concluding (zero) stanza—with an ellipsis that leads to an additional ending spread. Since the original “Five Little Monkeys” storyline would have repetitive illustrations, great care was taken to make sure each scene in my book had something engaging and visual appealing in terms of a “story”. In each stanza of10 Little Ninjas, the kids make it one step farther from of their beds (and therefore closer to Mom and Dad’s bed—the ultimate goal). They prowl through the hallway, ride the rails downstairs, and sail across the living room floor. I needed to give the illustrator (Nate Wragg) plenty of opportunity for fresh scenes and plot twists.

And now to answer my other questions…

• To make it fresh and original, I made it Dad’s turn to call for help. In addition, the characters aren’t the same “thing” in every round.
• To make it relevant, the characters are kids—in a diverse family. The parents share responsibilities of child-rearing as a team. The language is loud and silly, more in line with entertainment and gift-giving expectations of today.
• To make it stand the test of time, it’s got an element of heart the original didn’t have. The kids, whose ultimate goal is to sneak into Mom & Dad’s bed, portray a universal theme of love. The children work both individually and together, and one of the little cuddlebugs eventually makes it all the way there—creating a satisfying end (unlike the original song). Just as children (and parents) in the past and today crave snuggly moments, I expect that this recreation of a common experience will last for many generations. My children aren’t toddlers anymore, but they still love slipping into Mom and Dad’s bed every now and again.
• For kids/parents who don’t know the original song, the rhythm is consistent and easy to pick up on. Scenes include highly commercial and engaging features such as pirates, astronauts, sharks, dragons, firefighters, tigers, cowboys, and more.
• Since the book includes fun and chaos (the parents get drenched at one point) – kids will love to read it again and again. It works well for library story times. Parents and grandparents will love the wind down to a sleepy ending, and we all know that’s a daily experience. Hopefully these elements, along with the short length and sing-song effect will make it re-readable.

10 Little Ninjas is only about 300 words. At it’s core, it’s a remake and a counting concept picture book that celebrates imagination and creativity, and hinges on a loving parent-child relationship even in the midst of chaos. I can understand why people are surprised to hear it took me years to write (through dozens of drafts), given that it’s a simple concept and a short book. But I’m not surprised at the journey this or any other book has taken. Writing for children takes incredible patience, skill, and humility. My job is to spend months or years writing something that will be read in five minutes, for the youngest of audiences, and make it look effortless. I’ve learned it takes much more than being clever to pull off a re-readable kid’s book. Writing for kids takes attention to detail, craft, humor, and heart. 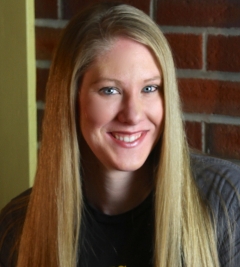 Bio
Miranda Paul is the award-winning author of the concept picture books Water is Water, Whose Hands Are These, and Trainbots, as well as the nonfiction One Plastic Bag. Her newest book, 10 Little Ninjas, was named an Amazon Best Book of the Month for August 2016 and is the #1 best seller in children’s counting books. Miranda is a frequent presenter at schools and libraries around the country, as well as a volunteer for We Need Diverse Books and Books for Africa. Learn more at http://www.mirandapaul.com.

Don’t forget to comment below to be in the drawing for 10 Little Ninjas!

30 thoughts on “Mining for Heart: From Classic to Contemporary – Writing (or Rewriting) a Concept Picture Book By Miranda Paul”