As I wrote a blog post about revision for Epic Eighteen Reads, it was clear that most of the revision process is about honing the heart of the story. Today I’ll take my turn on “Mining for Heart” and focus on how I “revised for heart” as I worked on AN INCONVENIENT ALPHABET, BEN FRANKLIN AND NOAH WEBSTER’S SPELLING REVOLUTION.

When I dug into an article about a revised English alphabet that Ben Franklin created in 1768, the heart jumped right out at me. It was right there in Ben’s words: “Those people spell best who do not know how to spell.” I laughed – typical Ben Franklin humor. I read it again. This time a larger meaning sunk in. It was about kids – learning to read and write and how they think just like the amazing Ben Franklin. It struck my teacher heart! With this story, finding the heart was easy. But…the big question was: how do I carry it through the story and make it ring with the reader?

After researching for several weeks, organizing information, and pondering – lots of pondering, I began by exploring story structure.

My first attempt used the alphabet, a new letter on each page, as I told the story. I almost made it through the story and alphabet before it fell apart, and if I could have rearranged the alphabet, it might have worked. But really, it was dull. The heart wasn’t in an alphabet sequence.

Next, I tried a compare and contrast format, focusing on the differences between Ben Franklin and Noah Webster in a back and forth exchange. Ah, now I was getting a sense of the characters! Many of the lines that would appear in the final draft were already there.

While Ben Franklin is a colonial rock star, Noah Webster is pretty much an unknown to kids. So how do I make a story of two men and a rebellious public connect with kids? It had to be in playing with the alphabet, words, and spelling – things they struggle with every day as they learn to read and write. There were many fun and challenging aspects that would ultimately fall to the illustrator to convey. I needed to shape the text so it made sense on its own and create an opportunity for an illustrator to take it to another level. It seemed like a somewhat unique problem to make the medium – writing – the conflict. (Elizabeth Baddeley has done a phenomenal job with the illustrations!)

I played with demonstrating the concepts of removing letters and changing spelling, sort of a fight on the page, but as my critique partners pointed out, those ideas would be lost in a read-aloud.

In spots, I brought in Ben and Noah’s sensible spellings (what educators refer to as “invented” spelling), the heart connection in action.

I tried a “meta” voice (breaking the 4th wall) that talked back to Ben and Noah, responding to the text and challenging them on the practicality of their ideas, the “child reader” that commented with honesty and innocence, bringing the reader directly into the story.

I experimented with using Ben’s proverbs, spelling tests for Ben and Noah, and revolutionary war slogans. (“I have not yet begun to spell!” These never made it into the final manuscript, but I still like the fun of them and think they deserve at least a blog post…stay tuned.)

I kept digging into more research about the historical period and problems with English as Ben and Noah saw them. I added more historical context. Details!

Throughout the process, I laid out the pages and highlighted, circled, crossed out, drew arrows, marked plot points, made notes, changed words, cut it apart, and played with sticky notes to move things around, all in an effort to make that heart shine through.

Back to structure, I replaced the quick back and forth contrasting characters with parallel narrative sections, before bringing them together. This changed the connection to the characters. I shifted the meta-voice conflict to characters in the illustrations. The layer about sharing your ideas really resonated with me as a writer, so I worked to enhance that. Still in search of the emotion and child element in a story about two famous men, the meta-voice returned as “Alpha.” (Sometimes it’s hard to let things go.)

Every few revisions, I asked for feedback from critique groups. When the manuscript was close, I got feedback from my agent. I was trying to do too much. (This is a recurring problem. So much good stuff – such a limited word count.) So…I cut and focused on the heart.

In a critique, Sylvie Frank, editor with Simon & Schuster, thought the “Alpha” character was distracting, Ben and Noah needed more personality, the climax needed reworking, and the end was flat. She said to pull certain back matter information in, add quotes, rethink the end.

Back into the research… to learn more about the characters’ friendship, to bring in their words. I’m only beginning to learn how details and context pave the way for the reader, and quotes contain the essence of characters, often the key to unlocking the heart. 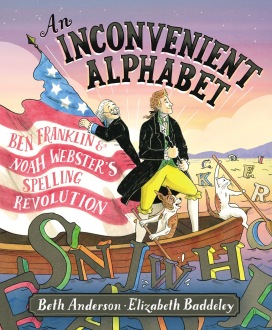 Digging out and honing the heart of a story through revision is about rethinking, and the input of others is crucial. Thank you Sylvie, Stephanie, Julie, Kristen, Kathryn, Ann, Kristen, Maria, Vivian, Kathleen, Heather, Kate, Michelle, Kristy, Alisha, and all who helped me through this process!