In 1854, Elizabeth “Lizzie” Jennings, an African American schoolteacher, fought back when she was unjustly denied entry to a New York City streetcar, sparking the beginnings of the long struggle to gain equal rights on public transportation.

One hundred years before Rosa Parks took her stand, Lizzie Jennings tried to board a streetcar in New York City on her way to church. Though there were plenty of empty seats, she was denied entry, assaulted, and threatened all because of her race—even though New York was a free state at that time. Lizzie decided to fight back. She told her story, took her case to court—where future president Chester Arthur represented her—and won! Her victory was the first recorded in the fight for equal rights on public transportation, and Lizzie’s case set a precedent. Author Beth Anderson and acclaimed illustrator E. B. Lewis bring this inspiring, little-known story to life in this captivating nonfiction book. Includes an author’s note about research, bibliography, and archival images.

E. B. LEWIS is an award-winning illustrator and fine artist who has illustrated over seventy books for children. He teaches at the Pennsylvania Academy of Fine Arts and lives in New Jersey.

“Beth Anderson does a remarkable job of bringing the oft-overlooked story of Elizabeth “Lizzie” Jennings and her fight for equality to light. It is necessary for kids and adults alike to understand that racial discrimination wasn’t only found in the American South, and Anderson simply but beautifully demonstrates this in her book. Lizzie Jennings was a brave pioneer who paved the way for future female leaders of the civil rights movement.”—Donna M. Beisel, K–12 Education Coordinator, Rosa Parks Museum 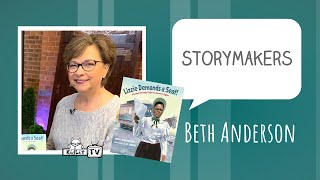 ⭐️ “…Anderson’s third-person text allows readers under Lizzie’s skin as her indignation at injustice mounts. Children will readily recognize both the conductor’s capricious cruelty and Lizzie’s anger that “being born a ‘free black’ in a ‘free state’ ” does not mean being “treated as equal.” Lewis’ dappled watercolors depict the action and extend it… Necessary.”  ~Kirkus

⭐️ “…When Jennings is thrown off the streetcar, shown in a dramatic spread, a white witness steps forward, and Jennings decides to take her case to court—a risk: “if she failed to win, she could make it worse.” But, supported by her community, she does win, notching the first victory in what would become a 100-year-long battle to end segregation on public transportation. Shimmering jewel-toned watercolors blur and delineate details in Lewis’s paintings…” ~ Publishers Weekly

⭐️  “…The well-chosen language—“She’d been rejected, restricted, and refused by schools, restaurants, and theaters”—is a pleasure to read aloud. Departing from the somber palette he used for Jabari Asim’s Preaching to the Chickens, Lewis employs pastel colors, shades of blues, pinks, and purples, and plenty of background yellow to portray the characters and their surroundings. This lightens the story and supports its positive outcome. Shadowy background figures remind careful readers of the larger community that supported Jennings and were affected…VERDICT An important story beautifully told.”  ~ School Library Journal

For signed copies of my books, visit Old Firehouse Books HERE, or Boulder Book Store HERE and let them know how you’d like the book signed. OR just drop me a note and I’ll send a personalized book plate.

A bit about the writing:

A Path of Inspiration – a few samples from school visits