Andrea Wang’s new picture book, WATERCRESS, has been all over the news recently. It’s an outstanding book in every way, a collaboration of skilled, sensitive, extraordinary book creators. I wish I’d had this book when I had a classroom full of English language learners from around the world with their myriad of experiences. Here Andrea provides a peek behind the scenes in the making of WATERCRESS.

And thank you, Andrea, for offering a giveaway—a copy of WATERCRESS with a signed bookplate! Just comment below to get in the drawing! (continental US addresses only, please)

Collaborating with an Illustrator: Watercress by Andrea Wang 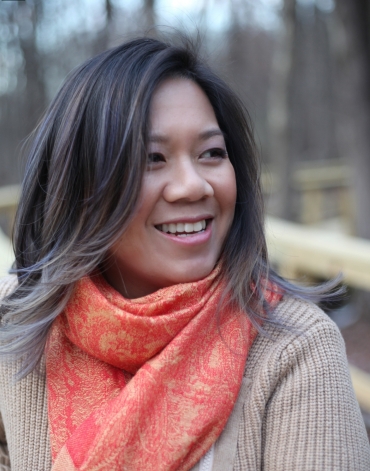 Most people don’t know that authors of picture books typically don’t get to choose the artist who will illustrate their book. And once an illustrator is chosen by the editor and art director, the author and illustrator are usually kept apart. I think the reason behind the separation is so the author doesn’t impose their ideas of what the illustrations should look like on the artist. I have heard stories of other authors who were then disappointed by the illustrations once they finally saw them, but I’ve been incredibly lucky and have loved the art for all three of my picture books.

After I wrote Watercress, a semi-autobiographical story about how my Chinese immigrant parents made me pick watercress from a drainage ditch by the side of the road, I had no idea if it could be a picture book. The main character’s journey was so interior and emotional – how would an artist show her transformation from shame and humiliation to awareness and hope? There were also layers of memories in the story, from my own memory that inspired the book, to the girl’s memory of being laughed at, and finally to the mother character’s memory of her own childhood in China. How could those memories be conveyed through the illustrations? I didn’t think the manuscript would sell, but it did. Legendary editor Neal Porter acquired it and convinced Caldecott Honoree artist Jason Chin to illustrate it. I was ecstatic. If anyone could figure out how to illustrate this story, it was them, along with art director Jennifer Browne.

What was unique about the illustration process for Watercress was how collaborative it was. Once Jason agreed to take on the project, Neal thought it would be helpful if Jason and I met, since the story was so personal. Neal then facilitated a meeting with all three of us during an NCTE conference. I had no idea what Jason, Neal, and Jennifer envisioned for the art, but I trusted them implicitly. They’ve all been making picture books for much longer than I have, and I’ve been a huge fan of their work. They’re the experts – they don’t need me to tell them what I think the art should look like! I think a big part of being a picture book author is trusting your artist and publishing team to do what they think is best for your book.

When we finally met, I wasn’t sure what information might be helpful to Jason, so I just rattled on about my family’s history. Once home, I dug through old family photos to send to Jason, looking for ones that showed my mother’s childhood in China as well as the rural Ohio of my own childhood. I doubt I’ll ever need to send photos of my awkward child self to another illustrator! We met up again at the following year’s NCTE conference and Jason showed me some preliminary sketches. He told me about researching the Great Famine in China and I pointed him toward a couple of potential sources of information for the China scenes: the Yin Yu Tang House at the Peabody Essex Museum in Salem (https://www.pem.org/explore-art/architecture/yin-yu-tang-a-chinese-house-exterior), and the Harvard-Yenching Library in Cambridge (https://library.harvard.edu/libraries/yenching). Fortunately, Jason lived close enough to Massachusetts that he was able to visit both places and find resources that helped him depict 1950s China accurately and authentically.

We discussed the details in the illustrations that seemed insignificant on their own but contributed so much to the time period and atmosphere when taken together. What kind of food was on the dinner table when I was small? A small meat dish, a vegetable dish, and always a hot soup and steamed white rice. Would the family drink water at dinner? Maybe the kids, but not the parents. My parents just drank the soup. What kind of clothes would the kids wear? I loved the hand-me-down t-shirt and jeans on the girl but pointed out that we wouldn’t have had enough money to buy t-shirts with official sports logos. What make and model of car was it? Here, I inadvertently sent Jason down a rabbit hole looking for the car that was shown in my family photos. It was a red Pontiac, I’d written in the story. In reality it was a Chevrolet, my brother informed me after magnifying the telltale logo on the hubcap. Our father did have a Pontiac later on, but it was dark blue. I had conflated the two. But I wanted the car to be red, as it is in my memories, and I also wanted it to be a Pontiac, because I liked the sound of the name better. Its hard consonants fit with the harsh Ohio landscape I described in the text. Jason found a red Pontiac that fit the time period and bought a toy version to use as a model.

I answered questions about details but tried very hard not to make any suggestions on what the actual pictures should look like. I wanted the book to be as much Jason’s vision as mine. He mentioned having cornstalks transform into bamboo canes; I told him that sounded great. He said he’d been sketching famine victims lying in the road; I was relieved when Neal and Jennifer steered him toward something more subtle yet no less compelling. He didn’t make the characters resemble me or my family members; I was happy about this because it gave me enough distance so that I didn’t burst into tears every time I read the book. I couldn’t have anticipated what Jason’s illustrations would look like, but the final paintings feel like a true representation of what my mind and heart remember.

Don’t forget to leave a comment to be entered in the giveaway for a copy of WATERCRESS. (continental US addresses only, please)

Andrea Wang is the award-winning author of picture books The Nian Monster (Asian/Pacific American Award for Literature Honor), Magic Ramen (Freeman Book Award Honor), and Watercress (JLG Gold Standard Selection, seven starred reviews). The Many Meanings of Meilan, her debut middle grade novel, publishes in August 2021. Andrea’s work explores culture, creative thinking, and identity. She is also the author of seven non-fiction titles for the library and school market. Andrea holds an M.S. in Environmental Science and an M.F.A. in Creative Writing for Young People. She lives in Centennial, Colorado with her family.

13 thoughts on “Behind the Scenes: “Collaborating with an Illustrator” by Andrea Wang”