There are lots of rules about writing for children and breaking them usually results in rejections. But…like in most aspects of life, if you do it right, that story might just turn out for the better. Thank you, Carrie Finison, for sharing your process in DON’T HUG DOUG!

And thank you for offering a GIVEAWAY! Leave a comment below for a chance to win a copy of DON’T HUG DOUG.

The winner of Susan Kusel’s THE PASSOVER GUEST is…. Maria Marshall! Congratulations!

Mining for Heart by Breaking the Rules  By Carrie Finison

When I first began writing my picture book DON’T HUG DOUG, I thought I knew what story I was telling. It was about a little boy who didn’t like hugs and who tried all sorts of things to avoid getting one from his overly-huggy aunt, uncle, and cousin when they came to visit. In the end of that early version, Doug adopted a puppy and deflected all his relatives’ loving attention onto his adorable new pet.

The story was fun to read and followed the “rules” of the traditional narrative structure — Doug made two humorous attempts at avoiding his relatives’ hugs until succeeding on his third try. He had agency and he ultimately solved his problem himself, in his own way. But as I mulled over comments from my critique partners, I realized that the heart of the story wasn’t working. I knew something was wrong, but I couldn’t figure out exactly what, or how to fix it.

I put the story away for over a year as I thought about it, off and on, and also worked on other things. Over that time, I came to realize three things: 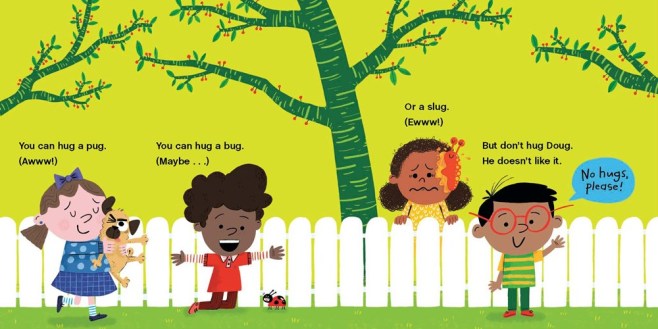 At the time, these problems seemed kind of insurmountable, which is probably why it took me over a year to come back to the story. When I did, I decided the only way through was to simplify. I knew I would not be able to resolve these story issues within the confines of a traditional narrative story arc. Doug could NOT solve this problem by himself. I needed to break “the rules” and break out of that structure if poor Doug was to have any hope of escaping these hugs.

I decided to boil things down to the most basic message, the heart of the story ­— don’t hug someone who doesn’t want to be hugged. As the words of this new draft came out, the story grew away from the traditional narrative structure, and became more of a concept book. In a traditional narrative, change, growth, and learning occurs in the main character. With a concept book, change, growth, and learning occurs in the reader themselves. As the writer, I could help Doug state his preferences in a way that would make the reader listen. And, I hope, the book will give child and adult readers practice asking out loud the question, “Do you want a hug?” and then answering that question in a variety of different ways. Not only would readers listen to Doug — they could listen to each other.

Someone recently said that they wished storytelling “rules” were called “tools” instead. The rule of three, the three act structure, the hero’s journey — these are all wonderful tools that can help writers tell a good story. But if they’re not serving your story or your purpose for writing, it’s OK to try something different. Follow the heart of your story where it leads and you’ll discover the best way to tell it.

Don’t forget to leave a comment for a chance to win a copy of DON’T HUG DOUG. (US addresses only, please)

19 thoughts on “Mining for Heart: “Breaking the Rules” by Carrie Finison”